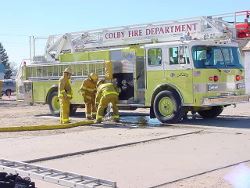 The Colby Fire Department was officially organized on May 1, 1923. Firefighting equipment consisted of a hose cart which was obtained in 1912. The Department was staffed with volunteer firefighters from the community, much like it is today.

In 1925, the City purchased its first motorized fire truck. Until 1948 the firefighting equipment was housed in business buildings. The City did not have a building designated as the "fire station". 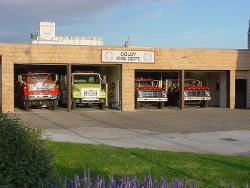 One afternoon in 1948, a fire at Harrisons' Garage in the 300 block of North Franklin, destroyed the building and severely damaged the 1925 fire truck housed there. This was the only fire truck the City owned at that time.

The fire was an embarrassment and left the City without firefighting equipment. At this time, the City decided to build a new two-bay station at the City Hall and have full-time firefighters in the department in addition to the volunteers.

As the years progressed, so did the Department. Additional equipment was obtained, the station was enlarged, the fire sirens were replaced by a radio pager system, additional full-time personnel were added, Rural District #3 was formed and now including the City of Colby we provide fire protection for 535 square miles of Thomas County. A Fire and Life Safety Inspection Program was instituted, a Rescue Squad was created, and we became Kansas State Regional Haz-mat team #8. 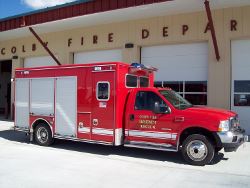 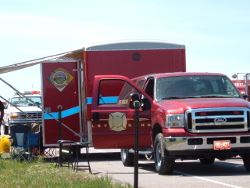 On Sunday Dec 31, 2007, 19 inches of heavy wet snow had fallen in Colby. The roof of the north bay of the fire station collapsed under the heavy load of snow and ice which necessitated moving all the apparatus to the Colby National Guard Armory for a period of 2 years. 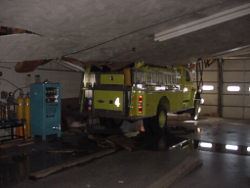 During April of 2009 The Colby Fire Department relocated to its new headquarters at 1125 S. Country Club Drive. 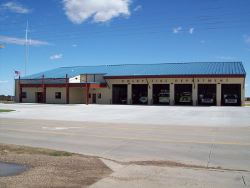 Many changes have occurred in the Colby Fire Department since 1923 and these changes will continue as time passes on. 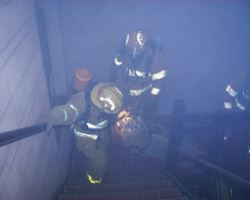 One tradition will never change, however, and that is to save lives and protect property from the ravages of a well-known enemy --- FIRE!!